Recently I had the opportunity to meet one of Australia’s Quiet Achievers. I had never heard of Lessa Siegele before the Queensland Quilters meeting, but after her talk I wondered why, when she has so many achievements to her name, she was not more widely known.

Lessa began on her Quilting path after taking a class with Eleanor Burns in Oregon in the 70’s/80’s and has been teaching quilting and craft related classes since 1973. She has been a respected member of the Quilters Guild of South Australia since its inception in 1984, and it was with some friends from this group, in 1993 that her achievements really took off.

Working together, Lessa and her friends organised a 6 day live-in quilt camp. This camp ran for the next 20 years, continuing in 2013 under a new banner “Quilt Encounter”. The inaugural Volunteers of the camp decided to take on some fund raising efforts and organised a quilt display in Leesa’s home and garden. The display, along with sales tables and morning teas, grew in prominence and stature and eventually the 100’s that came were too much for the little home that Lessa and her Honorary Quilter husband, Roger, now shared.

In 2002 Lessa was awarded the OAM, (the Order of Australia Medal), in the Queens birthday honors list for services to the art of quiltmaking as a teacher and to the community through fundraising.

Never to sit idle, Lessa had the idea to organise a pre-cut Mystery Quilt kit to raise monies. Each year at the camp, Quilt Encounter, they had a Mystery Quilt, so they knew the idea would be popular. The committee all had a “little” spare fabric which they pooled, along with their energies and cut the kits. The original thought was to have two classes, one on each side of Adelaide and perhaps if they were lucky, sell 100 kits. But while teaching in Sydney Lessa was asked if she could provide a mail order kit, and it snowballed from there! In 2008 they cut 300 kits and raised $16,000, about $10,000 more than they expected! In 2010 they raised $39,000. 2012 raised $75,000 and in 2014 they cut 1230 kits and raised over $104,400.00! They have ‘SOLD OUT’ this year.

The 9 women, whose age ranges from 54 to 85, have all achieved amazing efforts;  Starting and running the camp for the last 20 years and cutting and counting so many kits. In 2014 they cut 4000 metres of fabric, most of which was donated by generous quilters. As an added incentive for kit sales this year, if people bought 20 or more kits, a teacher would tour and teach the kit. 20 groups took up the challenge this year, including Queensland Quilters, which is how I came to meet Lessa. 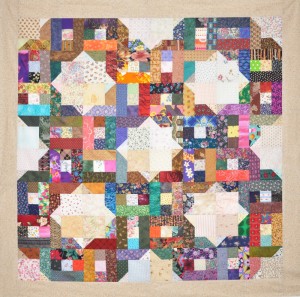 The monies raised have been donated to many charities over the time, but this mystery event was for Bedford. An organisation in Adelaide, Australia that help the physically and intellectually disadvantaged. One of the members, Faye Packham, who received the Lut-da award at the Australasian Quilt Conference this year for her outstanding contribution to her community through quilting has a daughter Lauren who has been helped by this wonderful organisation and she now works for them.

In 2007, Lessa received the coveted Rajah Award, which prompted her to make her own version of the iconic Australian quilt. While the original Rajah quilt is held in the National Gallery of Canberra and is 126” square, Lessa’s quilt is 63” square, and after many requests she wrote to the gallery and with permission has written a pattern. The pattern, which she still sells, has been very popular both here and in the USA.

While preferring to carry on the heritage of Australia’s own quilting heritage, she saw an old quilt in the USA which really appealed and has also written a pattern for that. She calls this one Ring Cycles, which is based on a Jack’s Chain block with unusual colour placement.

Lessa still teaches wonderful classes, concentrating on machine and foundation piecing techniques, achieving accurate points and details.  Unfortunately Lessa has decided not to teach any more, preferring instead to slow the pace of life alittle.
Brenda Wood can be contacted at TwoSewTextiles@Yahoo.com.au for quilt pattern enquiries. 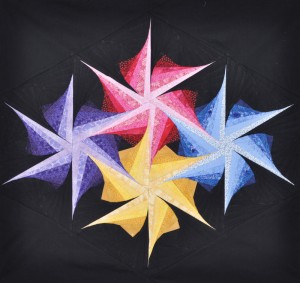 These quilts are amazing in the flesh! tiny, perfect and vibrant! Absolutely amazing – Brenda Wood

Photos with thanks from Roger Siegele, who is accomplished in photography, technical drawings, spreadsheets and without whom Leesa would be lost.

Textile Artist with a passion for colour and all things Ocean! Finding creative comfort from my surrounds and my imagination through paint, ink, fabric and stitch. My Business passion is 2 Sew Textiles - Unique Quilt Patterns and Textile Art items by leading Australian & International designers. Supporting Indie artists at www.2sewtextiles.com Creating Art and Words and opportunities...