There’s always room for a little more RAJAH! RobynsPatch tells us a little more about the coverted award named after the iconic quilt!
Lessa Siegele now has a pattern of the quilt available from me at 2SewTextiles on Craftsy or Etsy.

There are two major displays of award winning quilts at the Australian Quilt Convention each year. One is the ‘Rajah Award’. This is named after the historical quilt,  The Rajah Quilt, which was made by female convicts on the ship ‘Rajah’, as they were transported from England to Van Dieman’s Land (now called Tasmania), in 1841. Follow the link to learn more about the significance of this appliquéd coverlet, for it’s relevance to presenting the award, in recognition of the ‘outstanding contribution to quilting in Australia’. 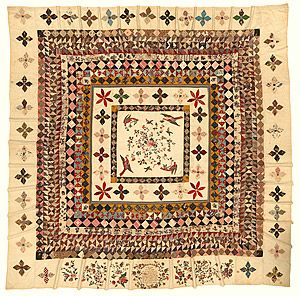 The displayed works of the previous year’s award winner are always a delight to behold. Michele Hill, the winner of the 2014 Rajah Award, is internationally famous for her William Morris designs and love of appliqué. These are just a few from her extensive body of work that were on display. 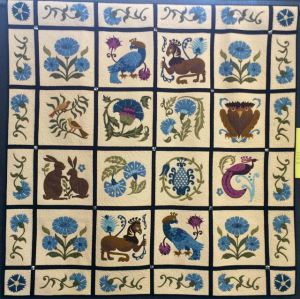 I'm a self confessed Fabric lover and colour junkie. I'm caught between being a Painter, Sewer (not the underground conduit kind!) & a Fabric manipulator, which makes me a Textile Artist! Between my family's sports adventures & life, I still manage to finish Textile pieces! I sell Quilt Patterns and Textile Art by leading Australian designers at 2SewTextiles! Creating Art and Words...